The June Allyson Show was an anthology drama series which aired on CBS from September 21, 1959 to April 3, 1961 with rebroadcasts continuing until June 12, 1961. The series was hosted by actress June Allyson and was a Four Star Production. Allyson was the third woman in network history to host such a series. She not only hosted the series but starred in many of the episodes. Some of the best known actors appeared on the series, including Dick Powell, Ginger Rogers, Harpo Marx, Bette Davis, and Ronald Reagan. 8 DVD Set  with 45 complete episodes.
This series has been available on numerous websites but all have distorted or muffled audio. During our remastering process we have improved the audio quality plus we have made the episodes true black and white instead of the green, pink tint that frequently is associated with film and VHS transfers. Check out the titles in this collection.
Posted by Video Guy at 12:59 PM No comments: Links to this post

Dante stars Howard Duff in this short-lived 1960-61 TV series, as Willie Dante, the owner of a San Francisco nightclub with a shady history. Neither the cops nor the bad guys really believe he’s done with the underworld, which causes all sorts of dilemmas. This is a really fun series. All 26 half-hour episodes are included in this 6 DVD box set. Guest stars include Ruta Lee, Allison Hayes, Dick Foran, Charles McGraw, Karen Steele, Edward Platt, Patricia Medina, William Schallert, Ann Robinson, Jacqueline Scott, Adele Mara, and others. Dante has been compared to the 1959-1960 CBS adventure/drama series Mr. Lucky, starring John Vivyan, as the operator of a legitimate gambling ship. Old time radio fans will remember that Howard Duff starred as Sam Spade, Detective. The quality of this series is very good and you will enjoy the stories.
Posted by Video Guy at 12:47 PM No comments: Links to this post 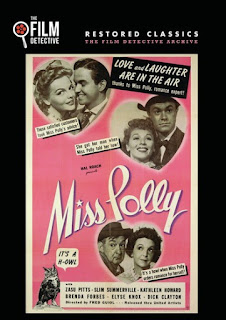 Miss Polly is about a small-town matchmaker takes on the local snobs in this zany farce from Hal Roach Studios. Two great comic performers, ZaSu Pitts and Slim Summerville, headline this forgotten laugher about a town where there hasn't been a marriage in two years. Director Fred Guiol cut his teeth on Laurel and Hardy comedies, so you know this one will bring you a smile! This is a wonderful glimpse of small town America in the early 1940s when America was a great country.  1941- BW - 45 Minutes.
Although I'm not a fan of THE FILM DETECTIVE, this is a great copy of this rare film. This company claims to restore films, but in most cases the "restored versions" are worse than the originals. Case in point is their release of Here's Flash Casey, a very poorly done copy of this great old film.
Other Zasu Pitts movies you might enjoy include: So's Your Aunt Emma (1942),  The Crooked Circle (1932)
Posted by Video Guy at 8:21 PM No comments: Links to this post

After many months of work, we are proud to present our collection of Public Defender TV classics. These shows were transferred from original assets and are not copies of any other previously released versions. Public Defender Vol. 1 includes thirty beautiful quality episodes in a 6 DVD set. You will also find Public Defender Vol. 2 is available. Yes, we know some of these shows are available for download or can be viewed on YouTube. But the quality of most of these is nasty. Our collection includes nice quality film transfers. For more information or to order these rare TV classics, visit MyVideoClassics.com.

Reed Hadley stars as Bart Matthews, Public Defender, who defends the poor and others who cannot afford an attorney. All episodes are based on actual cases from across the country. When this series was created, the concept of the public defender was little known in the United States except in capital cases. The series aired on CBS from March 11, 1954 to June 23, 1955. The series was filmed by Hal Roach Studios in Culver City, California. The Public Defender originally aired at 10 pm ET. Reed Hadley later starred in another classic TV show, RACKET SQUAD.
Posted by Video Guy at 10:19 AM No comments: Links to this post

Wow, we've been searching for good quality versions of this rare TV classic. This collection includes 16 rare episodes. George Nader is Joe Shannon, an insurance investigator for the Transport Bonding and Insurance Company, is assigned cases by his boss Bill Cochran who is played by Regis Toomey. The main character of Shannon is his 1961 Buick which is specially equipped with every high-tech gadget from that period. Shannon has no attractive secretary like other private eyes at the time because in his car sits a dictating machine where he recites his reports for Cochran. Shannon is the original  multi-tasker. Press a button and a movie camera pops up or a hidden gun appears. The show is based in Los Angeles and offers up some vintage street scenes of early 60's LA. Please remember these are film transfers from 1960s 16mm TV film and probably would be best viewed on a small device. These rare TV shows were filmed long before the advent of HD TV so don't expect high definition quality from old TV shows. Please visit our website MyVideoClassics.com for more information or to purchase this collection.
Posted by Video Guy at 10:07 AM No comments: Links to this post

We are really excited about our new website. Formerly Nostalgia Merchant we are slowly moving to My Video Classics. The site has been totally rebuilt by CI Design. The web address is now myvideoclassics.com, but we have all the wonderful Classic TV shows and rare movies still available. Plus we are now adding new releases almost daily. The new website is fully responsive, easily searchable to find your favorites and easy to shop. In addition myvideoclassics.com is totally secure and checked for security continuously by GoDaddy and the secure seal is located on the site to assure your information is kept secure. Come browse, you will really enjoy spending time at myvideoclassics.com. Oh, one more thing, in addition to hundreds of movies and TV shows, we have over 125 classic movie serials. 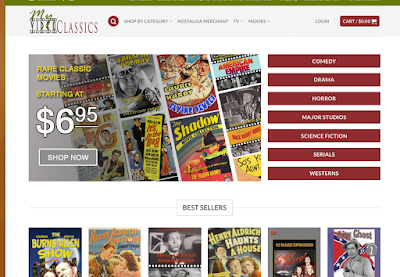 Posted by Video Guy at 11:51 AM No comments: Links to this post

An Affectionate Look at George Burns

An Affection Look at George Burns 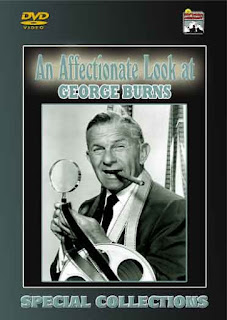 Wayne and Shuster take a look at the greatest straight man that ever lived, George Burns. He made a huge success of talking about what a failure he was. This documentary is jam-packed with wonderful clips of the Burns and Allen TV Show and movies. You will also see George and his pals in clips from numerous guest appearances on television. Jack Benny, Eddie Cantor, Bobby Darin, Carol Channing and many others. And of course, the story would not be complete without Gracie with the story of her early years in movies. Available on DVD from Nostalgia Merchant.
Posted by Video Guy at 7:47 PM No comments: Links to this post